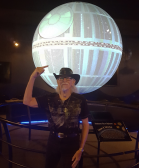 Until recent years, Colin Cantwell was not a name known by many, although nearly everyone recognizes his work. Cantwell designed and constructed prototypes for the spaceships in the original Star Wars movies, including the X-Wing Fighter, Landspeeder, Sandcrawler and the infamous Death Star. SyFy.com reports that the Arrestor Cruiser seen in Solo is also a modified version of Cantwell’s Star Destroyer design.

On July 16, the Space Foundation was honored with hosting Cantwell for a tour of its Discovery Center in Colorado Springs, Colo. Pictured here with a 3D version of the Death Star on our Science On a Sphere, Cantwell kept his Star Wars accomplishments rather a secret, finding the greatest joy in the creative process.

Cantwell is also credited with the nickname of “Hal 9000 computer,” as he assisted Walter Cronkite with the narration of the Apollo 11 moon landing in 1969. An article from The Know, The Denver Post’s entertainment website, quotes Cantwell saying, “When they actually landed I was practically in tears.”

The Discovery Center in Colorado Springs is filled with a variety of space history and a look into the future of space travel. You never know when someone like Cantwell may pay us a visit.

Learn more about the Discover Center on DiscoverSpace.org.